I had my feet up on the dash and I was immersed in the current summer novel of choice and Tim was lost in his thoughts as he sometimes likes to be when he is driving, companionable silence in our little Honda Fit as we buzzed across highway 152 on our way to Morgan Hill. We were meeting my college roommate and her husband to see Michael McDonald and Boz Scaggs in Saratoga at the Paul Masson Mountain Winery (amazing venue) when you are older trips back to your younger days with friends and music of those days is always a wonderful way to end the summer. My cell phone rang breaking the quiet and I looked down to see Mychal’s name on the screen and immediately answered the phone, “Hey bud, what’s up? My phone was connected to the Bluetooth so we could both hear him and he answered  “I have a fun story to tell you…”

For the fun story to make sense you have to know the original story first and for that we have to go back to when Mychal was 4 years old, it was a Sunday in the 90’s and we were staff Pastor’s at Capital Christian Center. On this particular Sunday Tim was filling in for the worship pastor who was on vacation and he had gone early to rehearse with the choir, Mychal had started going early with Tim because I was at home with Taylor who was a baby and Mychal could play in the nursery area relatively soon after Tim arrived on Sundays. I will always hold a very dear place in my heart for the nursery workers at Capitol, I am not sure I could have navigated that time in ministry life without them. The nursery was not quite available yet so Mychal found himself sitting on the front row of the church watching his Dad lead the choir. On the platform was a box for prayer requests, slips of paper and pencils were provided so you could write your request and then slip it into the box.  Mychal watched as a young woman from our singles group, Judi came down to the alter, wrote a request on a piece of paper and then slipped into the box. Mychal asked her what she was doing, and she explained to him the process. He then told her that he had a request and that he wanted to put it in the box. So Judi got a piece of paper and wrote his request out for him and then she slipped it into the  box for him too, He asked God for a gold fish. Shortly after finishing his request for a gold fish it was time to go to the nursery.

A week later Judi arrived at Single’s with a gift for Mychal, an adorable baseball aquarium she had found at a garage sale and a $5.00 gift certificate to a local pet store for a gold fish. She told Tim that as she walked away from Mychal that morning she wanted to make sure that he knew God answered prayers. She had felt led by the Lord to be the one to help answer his prayer request.  She was not a woman of unlimited resource; this was a sacrificial gift of obedience.

I cannot tell you as a Mom what that act of kindness meant to me, when you are raising a kid in the fishbowl of ministry you are just always praying that when your kids interact with fellow believers that the experience is good and that people will be forgiving and understanding of our children when they are less than good. So when someone chooses to invest in your kid and that investment comes from a place of love and authenticity that is a gift with eternal ramifications. Mychal learned in this interaction that he could trust his heart’s desire with a church family member; he learned that God does use people to help us along in life; he learned that people listen and obey God on our behalf and he learned that prayer matters…always… no matter the content.

Buster lived in Mychal’s room for about 4 years and he lived a happy contended life and grew to be the biggest goldfish you have ever seen in a kid’s room, really  he was legendary. And then without realizing it when I was cleaning around the bowl one day I did not get the little air cord that kept the bowl filtrated, clean and oxygenated back into the little groove that helped everything to flow properly, it got pinched and cut off the much needed flow of life to buster and he basically well…suffocated. I inadvertently killed my Son’s manna-from-heaven gold fish! I was sick, but he handled it like a champ. He was older and wiser and understood that there is a circle of life thanks to the Lion King.

And now that same son was on the phone telling me a story about Ben who is a 5 year old pastor’s kid who wanted a fish. Mychal had heard about this desire and so after church he got $20 from his wife and bent down to Ben’s level and told him the story of Buster and that he understood what it is to want a fish and that he wanted Ben to have one too. The next day Mychal got a text with a picture of a Beta fish whose name is Eddie Buster. Mychal once the receiver was now the giver, from one pastor’s kid to another.

And now Mychal passes along  Judi’s investment in him to Ben, taking Judi’s choice to obey God and be His hand extended to the 4 year old PK sitting on the front row early on a Sunday morning and adding his own obedience to grow another 5 year olds faith in a God who cares about even the smallest things…really kind is the circle of life. 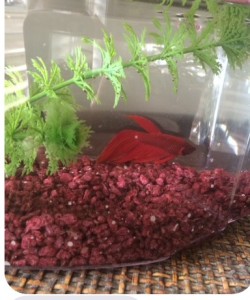