The musicians on stage were seated as they quietly played while the pastor was finishing his final thoughts for the day. All I could see were Mychal’s hands as he played the bass, so like his Dad’s and like his Dad he has played in a worship band for most of his life. I was taken back in time to the day we were sitting on his bed in his room with one last football game left in his junior year of high school. He had dislocated his shoulder horribly at the beginning of the season and been out all year while it healed, that week he was released to return to normal activity but the doctor warned us that if his shoulder took another hit like that one he could lose a lot of his mobility and use in that shoulder and arm. There we sat trying to decide what to do about this last game, should he play or not and of course he wanted to and I wanted him to play too I had missed seeing him on the field but when your values are to raise children who will pursue passions that glorify God you must look at the big picture. So, with tears in my eyes I reminded him that playing the guitar was something he could do for the rest of his life in church but he wouldn’t play football forever and we needed to think about his whole life not just this one moment. We agreed with broken hearts and a little sick to our stomachs that we should let that shoulder heal and he would light it up on the field as a senior.

And now as I sat in this service I realized I was living the results of that choice and the fruit of doing the hard things you must do as a parent. I had been enjoying a lot of those feelings this weekend of passing the crib and dresser to the next generation.

As we sat at lunch with Mychal’s boss and family I laughingly said what I have often said about Mychal “He is going to be an amazing adult if we can all survive his childhood.”  He has made me a prophet and it occurred to me that I could write a note of encouragement to parents who are raising strong willed children. For those of you in the thick of the battle, who are looking for hope and wonder if you are going to survive this kid that you know is full of promise but also just makes you want to take a nap…

The kid that tests everything you say.

The kid that tests the authority of every adult in their life to see if they are up to the challenge.

The kid that says exactly what they are thinking to the one person whose feelings they can hurt the most, completely unintentionally.

The kid who staged a revolt in his kindergarten class.

The kid who fired his 4th grade teacher because he thought his Dad was “the boss of her.”

The brilliant kid who earned poor grades as an elementary student because why did he need school? Someday he would have a secretary and she would take care of all of that.

The kid that drove me to prayer, generated many journal entries so I could process my feelings and created deep and abiding gratitude to Dr. Dobson who offered hope to my anxious heart.

Sound familiar? It is going to be worth it? Yes, I promise! But you must stay the course. Don’t let up with all that you are doing even though you are exhausted. And I know you are…EXHAUSTED!

Keep setting limits with realistic consequences when they test the boundaries.

Keep having conversations about purpose, calling and what God has design for them.

Keep enlisting the help of grandparents, teachers, coaches, youth pastors and other key adults in their life.

Keep helping them adjust to disappointments, difficulties, unfair outcomes, and the hard in life. Don’t change the world to make things easier for them that will not give them the tools they will need to handle the realities of real life.

Keep using your own mistakes as good teaching tools for them.

Keep growing as a parent, seek advice and help when you are unsure of what to do.

Keep teaching balance. I used to say to my kids “We work hard and then we play hard.” Not using play as reward for hard work but that in life we need both work and play to remain emotionally healthy. If any child needs to learn balance it is the strong-willed child they tend to do everything hard, or all out or with intensity use whatever colloquialism you choose but doing things in balance does not come naturally to these types of kids.

Keep praying and seeking wisdom from God, He loves your kid more than you do anyway.

Keep celebrating the victories of good choice making, of striving to reach goals especially relational ones. Verbal affirmation is a must when they have chosen well, and compassionate instruction is necessary when they have not.

When we walked into Winchester Glass INC, everyone greeted us with smiles happy to meet Myke’s parents. Winchester Glass INC is owned by the Reisner brothers (pastor’s kids also) and they hired Mychal for computer design for their very high-end business, they do most of their work in Beverly Hills. Cory grinning from ear to ear told us all about how far Mychal had brought them in just a short time. How his work ethic had changed the work dynamic in their company. How grateful they were to have him. His brother also came to meet us and he was also full of compliments and gratitude for the gift Myke has been to them. It is one of those moments in the life of a parent that you just step into and enjoy.

Mychal had basically taught himself the CAD program that the company had purchased as a thank you to someone who had blessed them incredibly. The 2 employees that filled the job before Mychal had never really been able to truly figure it out. Mychal had done it by reading the manual and applying his other computer knowledge and in a matter of days was utilizing it in a way that the company had not yet experienced. The remaining employee left of his own volition and Mychal will be working on his own now with opportunity for over-time when a project needs it. He has already earned a bonus and a substantial raise. But what really matters is he is utilizing all his talents and abilities to create things. What I personally love is that he is lending his talent to people of integrity who look for ways to employee people, give back to others and who run their business with dignity. All Christ followers living Christianity before those who need to see it most.

I have not shared these things to brag about my kid but to highlight the fact that the very attributes that make a strong-willed child a challenge to raise are the very attributes that they need to change the dynamic of any environment where they plant their feet. It is the tenacity, the ability to question and challenge, the ability to look outside the box for the answer that will help them accomplish all that God has created them to do and craft who they are to be.

A strong-willed child is going to create, it can be chaos or it can be constructive contribution and that is dependent on a combination of how they are developed as a child and their own adult choices.

As I sat watching his hands glide across the bass on Sunday, I realized that what often helps a strong-willed kid find their way are activities for which they become passionate for Mychal it was football, guitars and technology. Of course, the path to finding those things will not be easy because often they try a lot of things before they find the right fit. It is highly likely that there will be lots of stops and starts on that journey but don’t stop helping them look and be grateful for websites that let you resell used items, probably going to need those. A day is coming that will give meaning to all the hard work you are doing now…I promise! 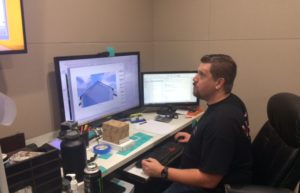